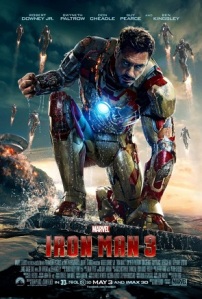 From Wikipedia (Under Fair Use)

We have received four delightful movies starring the brilliant Robert Downey, Jr., and I thought it was the right time for a rousing character analysis of his version of Tony. I shall concentrate on my favorite of the series and the most recent incarnation: Iron Man 3.

Conscious Desire: To find the Mandarin, protect and save Pepper, and save the day in the end.

Unconscious Desire: To come home–he’s still in that cave, still creating armor to protect himself from any and all bad guys. Once he realizes even his armor can’t protect him or the one he loves, he’s lost until he finds out that the armor…is within him all along. *wipes away a tear* Well, and the fact that Pepper can take care of herself now. But I digress.

From the beginning, RDJ already seemed like the perfect guy to play Iron Man. And the ad-libbing that he brings to the character, and the wordplay with Pepper Potts (Gweneth Paltrow) creates something very unique, not seen in other superhero films (or many newer films, for that matter).  And he was excellently done in Avengers, being the cynical, modern guy, a huge contrast in comparison to the trusting, innocent Steve Rogers/Captain America. Our Tony got most of the best lines, and pretty much the biggest character and heroic moment in the franchise.

And Iron Man 3 was right to milk this for all it was worth.

The beginning of the movie starts with Tony showing several signs of some kind of anxiety problem, having a panic attack or some kind of nervous incident in a restaurant. There have been several really awesome articles on this (just google Tony Stark PTSD). Besides Batman, we haven’t really seen Marvel delve into this side of the superhero coin–what happens when our heroes have to deal with the human part of being human? After all, Tony himself always says he’s just a guy in a suit. We see that very statement played for keeps in IM3. He’s actually barely in the suit at all! He drags the thing through the woods, it gets broken constantly, he ends up infiltrating a compound using things he invents on the fly, etc. I thought it was incredible that they were allowed to get away with this, I would assume there was a board of suits that demand that Iron Man is in his suit fighting goons in regular fifteen minute intervals. I’m a big comic book fan because of this very thing–seeing the heroes deal with the human side of things. I like stories about Bruce Wayne, Clark Kent, Steve Rogers–not necessarily Batman, Superman, and Captain America. They are ‘heroes’, they are public personas, they are archetypes and not human or relatable. Bruce Wayne is a kid who just wants his parents back, Clark Kent is a guy trying to make the world a little bit better than the day before, Steve Rogers loves his country. Tony Stark is just a guy trying to protect his girlfriend and deal with some bad dreams. Of course, those bad dreams are because he’s trying to deal with the fact that he suffered a particularly horrifying trauma, and needed to talk to someone about it but didn’t know how. Everyone can relate to being afraid. Everyone can relate to wanting to protect someone. Tony Stark wasn’t the playboy billionaire philanthropist. He was a guy. Just a guy in a blue shirt, trying to get home, in more ways than one. Seeing his house destroyed was great symbolism–his public persona, his fun-loving old self was gone. (The beginning scene in 1999 was also a great juxtaposition.) If this was the comics, this would be the future Tony that gave up drinking.

He’s fallible, he makes mistakes, he’s funny, and he can “fix stuff”. He’s a mechanic. He’s a person. And he’s Iron Man.

And that is why Iron Man 3 is my new favorite movie of the entire Marvel franchise.

Appeared in: Countless comics since 1939, various movie and TV incarnations.

Character History: We all know the story of Batman. Those that don’t, please follow these directions:
1. Log off of your internet browser.
2. Find a large book.
3. Place head inside book, and stay there for two and a half weeks. Twirl around three times.
4. Log onto Wikipedia and type “Batman”.
5. Read.

Bruce Wayne experienced the violent and brutal deaths of his parents at the hand of a street thug (varying, depending on the incarnation) Joe Chill. Promising to never let another innocent suffer the same way he did, he was inspired by the symbol of the Bat and uses it as a guise to strike fear into the hearts of criminals. Despite different incarnations and origin tweaks, campy romps and gritty realities, Batman has remained a crimefighter and a bastion of justice in the corrupt cesspool that is Gotham City.

(For the purposes below, I will be using Batman Begins as the story, as Bruce Wayne’s various conscious desires change depending on what story he’s in)

Conscious Desire: To right wrongs and find a way to fight crime, does this by first by learning from Henri Ducard, and eventually becomes Batman.

Unconscious Desire: To regain the sense of security he had as a child, to right the wrong that was done to him, and to ensure that justice has a fighting chance.

Personal Thoughts About This Character:

Bruce Wayne, despite his coldness and anger, is a particularly caring character. An oxymoron? Nope. He cares a lot. You have to care about people to dress up as a flying rodent and bash heads every night. Revenge is a motivator for only so long. He learns this well in Batman Begins when his chance for direct revenge against Joe Chill is taken away from him. When he’s at the docks, thinking, and he throws the gun away, he realizes that he can’t bring his parents back by doing what he’d been planning. He had to become better than that. It is a sort of revenge, what he does, against the system that created people like Joe Chill. Bruce knows exactly what’s it like to suffer injustice, and he doesn’t want that to happen to other people. The reason why he’s such a jerk is because he doesn’t want to let people in anymore, because he knows how bad it hurts when he loses them. He’s constructed these walls that are practically impossible to break down. At the end of Batman Begins, when Rachel says that Bruce Wayne is the mask and Batman is his real self, this is a great example of what I mean. His persona as public Bruce Wayne is fake, and Batman brings out his real desires. He had to become as scary and bad as the people he fought, to be strong enough and scary enough to beat them. But deep down inside, he’s still the little boy, just wanting to never be scared again, wanting security and happiness. I was surprised Nolan didn’t have him have a worse reaction when (SPOILER) Rachel died in Dark Knight. From what I know of the character, and especially since she is one of the last few people he ever really let in, I would expect him to have a harder time.

Agree, disagree? I’d love to have a discussion with you about it!

I’ve been working on my novel for what seems like forever. I’ve honestly been working on it since high school (I’m almost 26, now), and my characters are as familiar to me as anything. However, I recently found myself having trouble with them. They were too familiar. I didn’t know why they were doing the things they were doing. I had forgotten their original motivations. I stared at a blank page, having absolutely no clue of what my character really wanted, other than ‘freedom’. But my teachers taught me that ‘freedom’ isn’t really a concrete goal. I didn’t understand what they meant, I’ve seen tons of movies where ‘freedom’ was the primary goal. But today I realized exactly what they meant. It’s not just freedom the character wants, it’s freedom to do something. Freedom to live life with their family, freedom to have a house in the country, freedom to slack off and be lazy, etc. My character wanted freedom, but it wasn’t just freedom he wanted.

In this blog I will be listing various character analysis, hopefully it will help you out with your stories too!

What’s in a name?

It shouldn’t be so hard to come up with a name for my new art website. Right? I mean, in theory. But it is hard. Every name I’ve come up with has been taken already! I thought I was so clever in thinking of something cool like, “Paper Dragon Art!” Nope, taken already. With the advent of the internets, I honestly think all the cool names are taken already. We’re gonna end up having to do the whole AOL dealie and make ugly names like “PAprDrAg0n1289.com”.

So if anyone even thinks of taking Paper Portrayals, I demand that you leave an equivalently cool name behind.

Just not as cool as Paper Dragon.
Sigh.

My first post! Huzzah! Isn’t there something just so refreshing about creating a new blog, that’s empty of old embarassing posts and rants about just how bad your day was and how much you liked that one movie you can’t stand anymore…
So yeah, I’m probably going to do that again.